NGC 6726 is a reflection nebula located in the constellation Corona Australis. Visually, there is a deep space neighbor, the Chandelier globular cluster NGC 6723. These deep space objects can be also found on my wide-angle picture of the Milky Way in the left bottom corner.

Rho Ophiuchi is a triple star system (on the left side of the picture) in constellation Ophiuchus. The light from the stars is partially absorbed by the gas, which makes the blue reflection nebula visible. Smaller reflection nebula called IC 4603 is located on the right. The picture shows just small frame of significantly bigger nebula, called Rho Ophiuchi complex, which combines star Antares, globular cluster M4 and many more reflection, emission and dark nebulae. In order to capture the whole complex, one has to use significantly shorter focal length, like 130 – 200 mm.

The picture was taken under dark skies of Fuerteventura and it’s a stack of 73 pictures, 3 minutes each, which makes total integration time 219 minutes.

These two magnificent nebulae are located visually close to each other in constellation Sagittarius. This means we are looking in direction of the galactic core of the Milky Way. Trifid nebula (up left) is a combination of a reflection nebula (blue part), a dark nebula (brown clouds), an emission nebula (red part) and a star cluster. On the other hand, Lagoon nebula (right side) is an emission nebula – giant cloud of ionized HII gas. Due to very low southern declination, it’s very difficult to photograph these deep space objects from my home place in Central Europe. Therefore every time I travel south, I take the opportunity and recapture these nebulae. My first attempt of M20 was done with focal length 917 mm, second one with 630 mm and now I used gentle focal reducer. Focal length 570 mm allowed me to fit both nebulae into the field of view of APS-C sensor size. The picture is an integration of 213 minutes, taken under dark skies of Fuerteventura.

Iris nebula, known as NGC 7023, is a reflection/dark nebula located in constellation Cepheus. It’s 1300 light years far from the Solar system and it has 6 light years in diameter. In the middle of the nebula rules so called baby star, which is only few thousand years old. The star was created partially from the gas which is now illuminated.

The picture was taken under dark skies of Greek island Karpathos during my 2019 expedition. Unfortunately, the weather was very bad. There wasn’t a single cloud on the sky, but it was extremely windy, therefore I got only one single steady night and this night I wanted to capture also other deep space objects. Therefore the picture is a stack of only 37 pictures, each 2 minutes long.

Messier 78 is a reflection nebula located in constellation Orion, visually not far from stars Alnitak Alnilam and Mintaka, which form the Orion’s belt. This nebula is one of the brightest reflection nebulas on the sky, due to reflection of the light coming from two bright stars called HD38563A and HD38563B.

My previous attempt to capture this nebula during my expedition to Schwarzwald was not that successful, due to the due problems, therefore I dedicated nearly 3 hours to this DSO. However, it looks like the picture would need longer integration time. 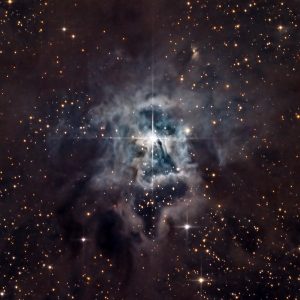 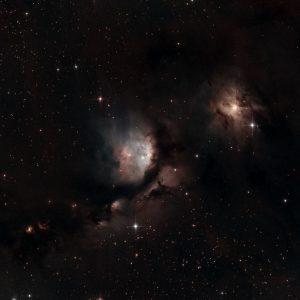 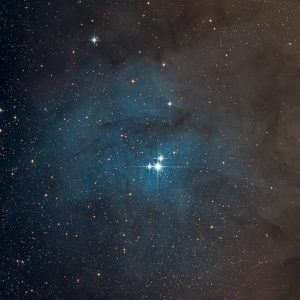 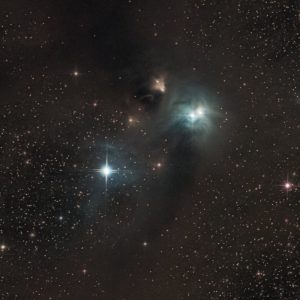 Iris nebula is one of the most difficult deep space object to capture. Not the nebula itself, but the dark clouds around it. In order to capture these clouds you have to be under very good skies – with minimal light pollution. The reason is simple – the clouds are dark, but the background as well, therefore if you want to visualize the contrast between something which is dark and something which is even darker, good skies are essential. Since I live in sub-urban area, I had to wait till 1 o’clock at night. At this time nearly all street lamps are switched off and the light pollution drops to acceptable level.

Anyway back to the nebula – it’s reflective nebula (similar to Pleiades) located in constellation Cepheus. It’s 1300 light years far from the Solar system and it has 6 light years in diameter.