Messier 76 is one out of four planetary nebulae in Messier catalogue. It is one of the dimmest objects in this catalogue. The nebula is located in constellation Perseus and it is 2500 light-years away from Earth. M76 was discovered by Pierre Méchain in 1780 and in the same year was catalogued by Charles Messier.

The picture is a stack of 58 pictures, each 180s, which means nearly 3 hours of the integration time. However, the conditions were far from optimal, because the Moon was in first quarter and illuminating the skies. Helix nebula is the closest and the brightest planetary nebula in the sky. It was discovered by Karl Ludwig Harding quite long time ago at 1824 in constellation Aquarius. This nebula is similar to Dumbbell or Ring Nebula, only it’s much bigger and bit closer – approximately 450 light-years.

I took this picture on Gavdos. This nebula was my primary target there, because in Switzerland is located not far above the horizon, therefore I would have to capture it through heavy light pollution. In the southernmost point of European continent was way upper in the sky. I was collecting the light coming from this nebula several nights and it was worth it: Here comes another comparison between two cameras, telescopes and mounts. ZWO 1600 MC competes with Moravian G2 8300. Ritchey-Chrétien 154 mm competes with Newton 254mm f4 and Gemini G53f is challenged by iOptron CEM25P. I know it is incomparable aperture, price and portability, moreover the integration time is in favour of Newton, but I am very positively surprised by the outcome of the portable setup (ZWO, RC, iOptron). The nebula is logically better captured by the Newton, but RC telescope has definitely more regular star shapes (except the corners, there is quality quite poor).

Brief description of the Dumbbell nebula is here. Upper picture was made by heavy equipment (MII G2, Newton 254mm and Gemini G53f) and the lower picture was captured by portable setup (ZWO, RC 154 and iOptron). Messier 57 is a planetary nebula, which can be located in constellation Lyra, not far from well-known star Vega. The name planetary nebula has nothing to do with a planet, because in a small telescope it can look like a Jupiter, but in the reality it was a star, similar to our Sun. At the end of its life, when the fuel was consumed, the star inflated and ejected the material away. The nebula, as we see it today is illuminated by the white dwarf in the middle.

Planetary nebulae have nothing to do with the real planets. However, by its circular shape, they resemble the planet. In fact, the planetary nebulas are types of emission nebulae, which consist of the ionized gas ejected at the end of the star’s life.

Something similar will eventually happen to our Sun, but there is still 5 – 7 billion year time. The Sun will turn into a red giant and afterward forms a planetary nebula. 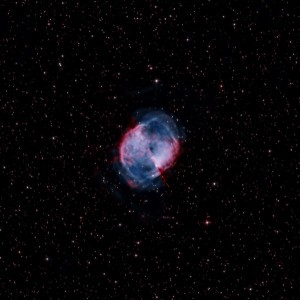 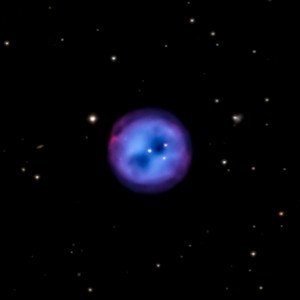 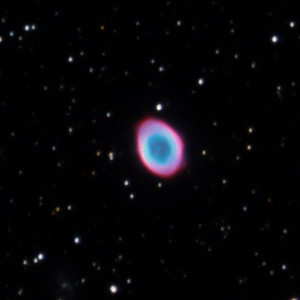 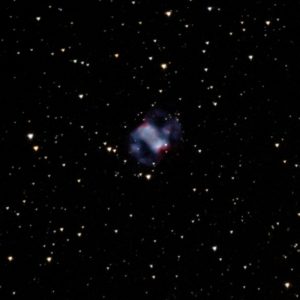 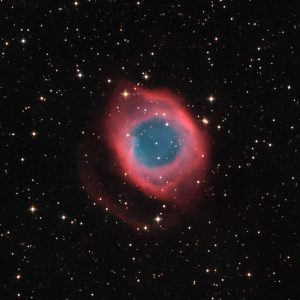 Actually, this is my second attempt of this planetary nebula. This time I concentrated on bi-color image composed of hydrogen alpha (Hα) and oxygen (OIII). This is because of the fact that the planetary nebulae contain these two gases. Hα was inserted into red channel and OIII into blue and green channel. Post processing was done in PixInsight software. Here is another planetary nebula called Owl nebula. It is approximately 2000 light years far from solar system and its diameter is approximately 1 light year. Here I played with the composition, in order to capture another deep space object – M108 Surfboard galaxy (left bottom).